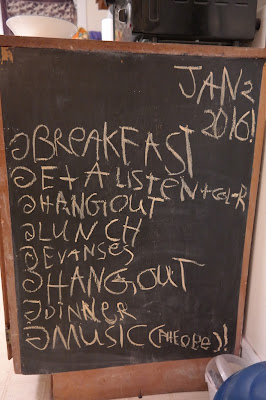 This might be the longest January in the history of Januaries (is it just me, or has it seemed really really long??), but here it is, suddenly nearly over.  Before it began we were having balmy, spring-like weather, and here as the end nears and Orion is high in the night-time sky, we are to have weather in the 50's again.  And in-between? Heavy snows for this part of our world. It's like it's March, not January, with the crazy polarized weather.


We've gotten back into a swing of sorts, with mornings together and a gradual drifting around lunchtime to computers, books, block towers...It is suiting us right now, which of course doesn't mean it will last, but I'm feeling like there is a great balance of structure, juice, fermentation and creativity. I am reconfirming my allegiance to down-time and the power of nothing-to-do, and it is feeling pretty good. 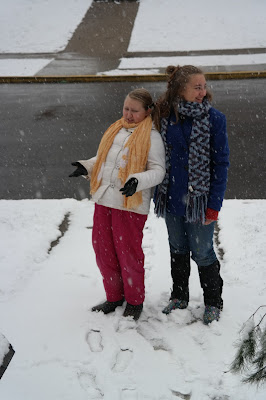 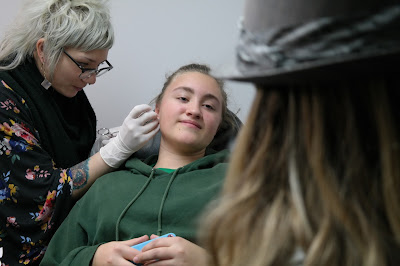 An event of note: Eliza got her ears pierced! It was a family event, of course, and Dan had his holes re-pierced, while Ani and I just hung about for moral support.


There was a sleepover with Ari Beloved Jones.  They've been doing this for so many years now - the worming down the stairs in the sleeping bags to play Go Fish! before the rest of the house is up, the polite request for pancakes and hot chocolate, and oh, the giggles. I have a feeling they'll be playing Go Fish! for a ridiculous number of years to come, just because it makes them giddy. 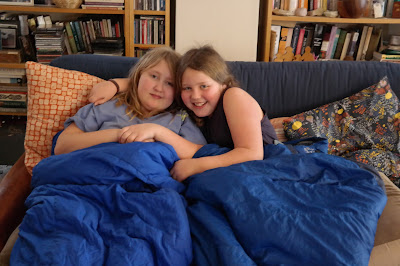 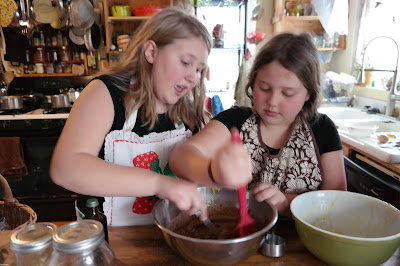 Have you ever had Totoro make you french toast for breakfast? Mmmmm. 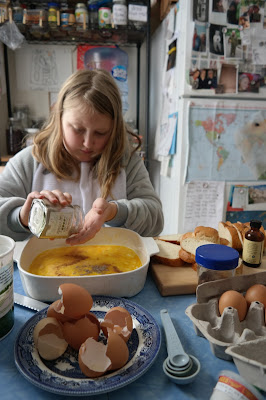 We are all finding ways to move our bodies these days.  The week starts Monday morning at 6:30 with a yoga class for Dan and I, and it is kind of amazing that we are able to get there and enjoy it so very much.  (On the morning of our first class - new January habit, you know - the car was frozen shut, so we had to crawl in through the back of the car - and back out once we got there - and back in once it was over, because it was still frozen! That's dedication.)  Ani is reluctant to take any classes, but one of our favorite people, the girls' poetry teacher, whose official title on her business cards is "Warrior Poet", happens to be a black belt in karate and teaches a class at the community center.  I floated the idea of attending by Ani, and the two of us signed up and go twice a week.  It is awesome to share that with her. It's a little like giggling through gym class, with your kid (please do not tell Sensei Wendy we are giggling, though she might have caught wind of it as we did our best at pushups the other night. Oof.) 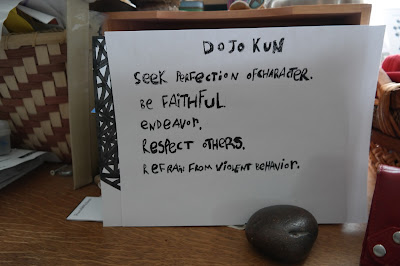 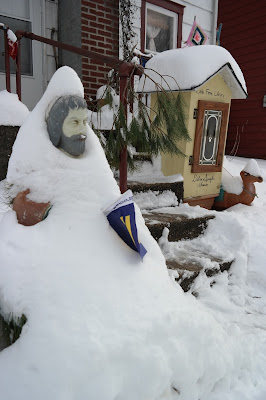 And there was last weekend, the big snow, which is now almost gone, but gave us quite a nice cosy Saturday, with rehearsals and shopping cancelled, and a good workout with the shoveling.  We can say we've had a taste of winter, and big good-bye to January... 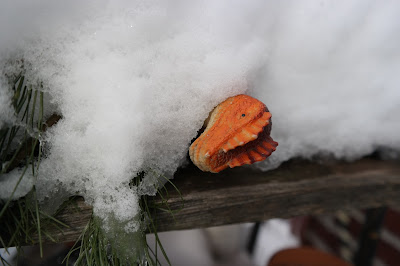 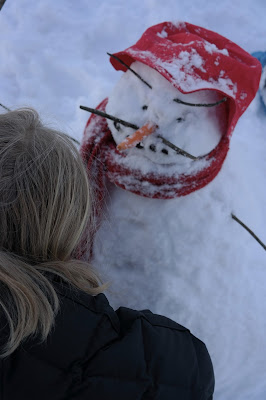 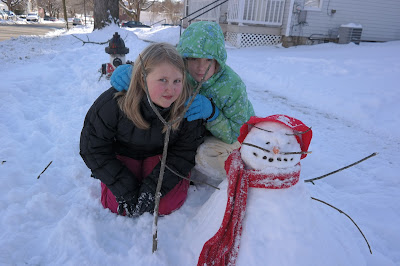 Labels: EJ, friendship, the daily do

We were so busy hugging and eating and breathing together... 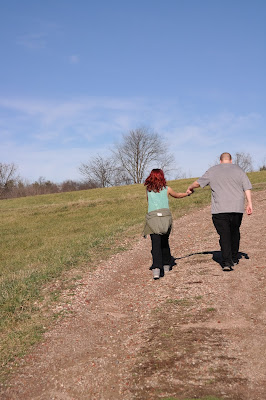 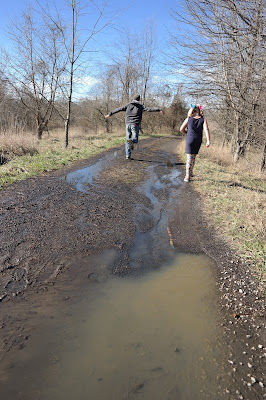 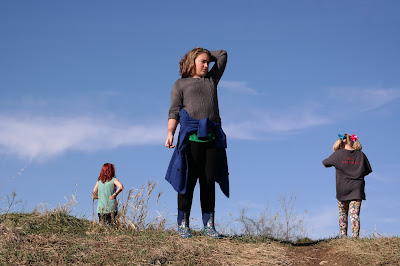 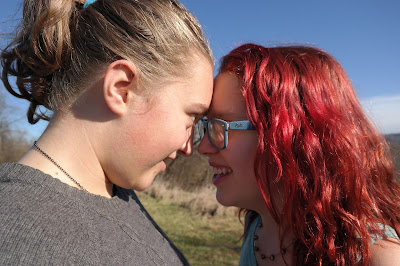 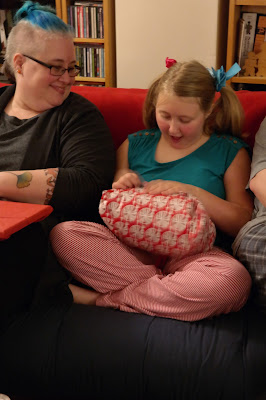 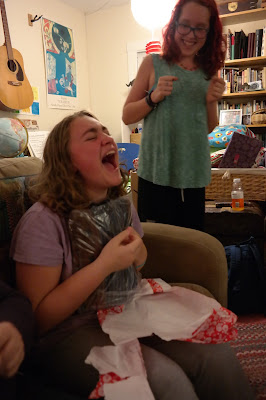 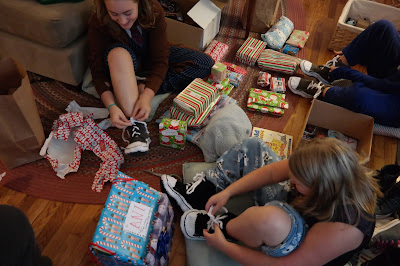 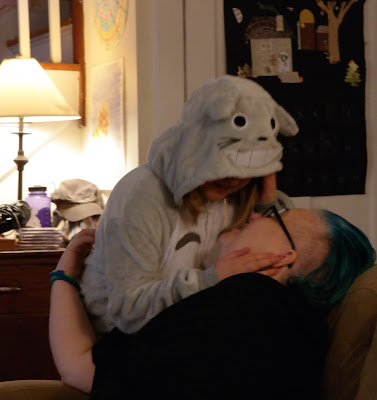 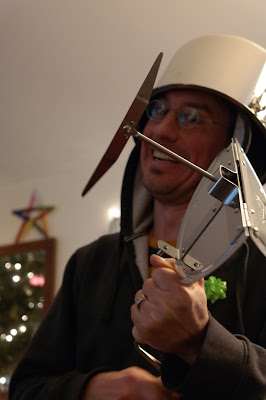 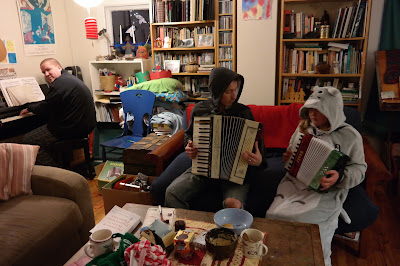 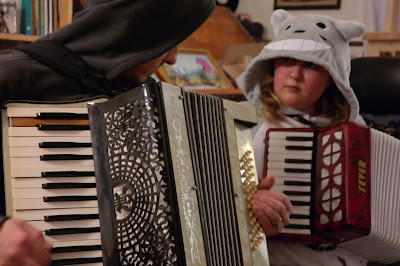 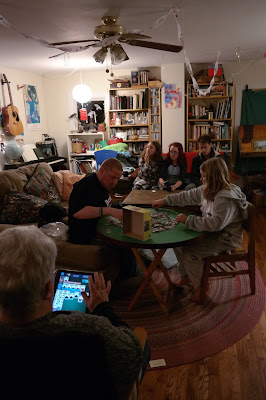 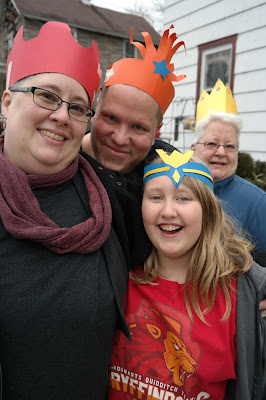 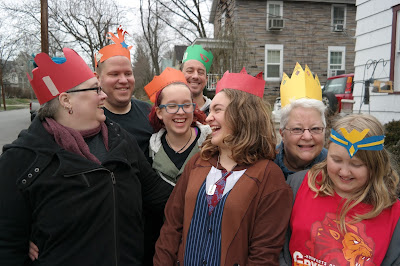 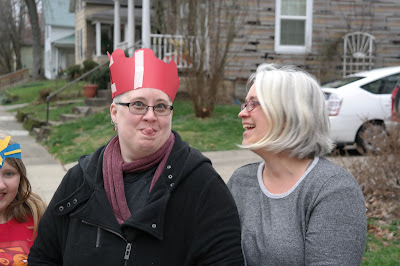 We watched the relatives disappear down the road, then we crawled back into our beds that felt too big and too quiet...But they thought about us, too. Missing them. And they missed us.

It was a Christmas week beyond compare: the temperatures were in the high sixties almost every day, the moon was full, coaxing some of us out at late hours after others were asleep, to walk and talk and make sense of the world. No one got sick - not even a sniffle - which if you know our record is downright miraculous.  My brother-in-law ran outside for a walk every time it rained, because he loves it so much, and I made the best turkey I've ever had and got to share it with the women who raised it, which was such a pleasure. My mom had a birthday with lunch out and a surprise bell concert and streamers and margaritas, and we quietly met for coffee every morning in the kitchen before the others awoke. There was so much to treasure, the gifts were superfluous (and lovely, of course).  We have entered the new year tired and chock full.

Labels: celebration, family
Newer Posts Older Posts Home
Subscribe to: Posts (Atom)
Welcome! We are a life-learning family in South Eastern Ohio and this is a journal of our day-to-day living...We would love to hear from anyone wandering this way in the blogosphere, so please say hello in the comments!