such a sweet time...

I hope that you have friends in your life that slip like a favorite pair of jeans right back into place, even though they've been lost under the bed for years. Wait. That didn't come out quite right...I mean, the jeans, not the friends - but maybe you live aaaaaaall the way across the country, and never ever see each other, and even so, when you are together you get right back into being easy with each other as if no time, and no monumental life happenings had occurred?  We have one of those in our home right now, and it has been both incredible and incredibly normal to have her here. 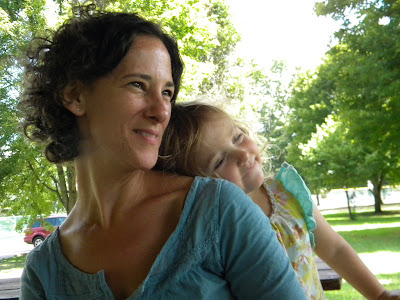 Bubbie was one of the first people to hire us for work when we first moved to Seattle as babies in our early twenties.  Bubbie (um, not her actual name, but it's been so long, who knows just when we started calling her that? and I won't begin to share her names for me...) was on hand to celebrate when Dan and I got engaged, in a cabin in the Cascades so long ago.  Bubbie was The Person at our wedding; the one who asked us all the questions that got things in the right places at the right time for the Event (shoo, it was an event).  Bubbie was at the birth of both of our babies, and I held a corner of the chuppa at her wedding and flew to Seattle to help welcome her baby into the world.  Such honors and milestones we have witnessed together. It's like bread and water - or salty rosemary bread and a glass of red wine might be more like it. Essential, and everyday.

So she decided that while her husband renewed his youthful vim and vigor at Burning Man, she and her beautiful daughter would come to southeastern Ohio (what a choice!) to watch our kiddos fall in love. It was about time. 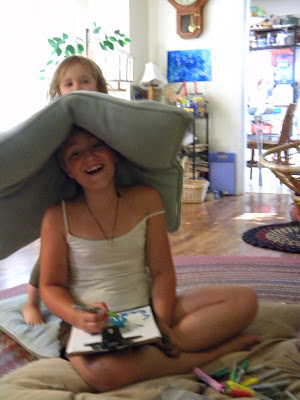 Eliza was totally ready to have a toddler in the house.  Suddenly her maturity shone in her level of patience and amusement at having such a small one around.  She drew dozens of pictures for Helvi, watched her carefully outside, rescued the cats from her clutches, and was really happy to be counted on as one of her caretakers. 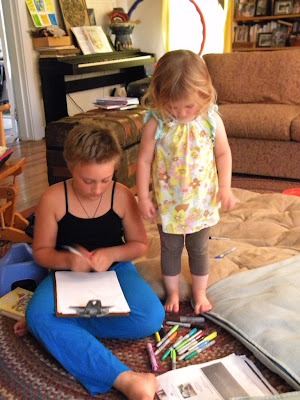 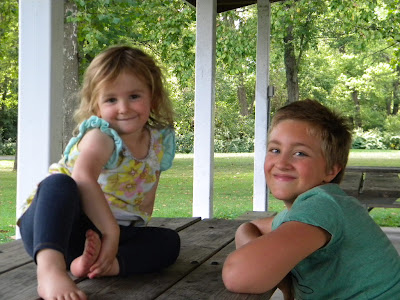 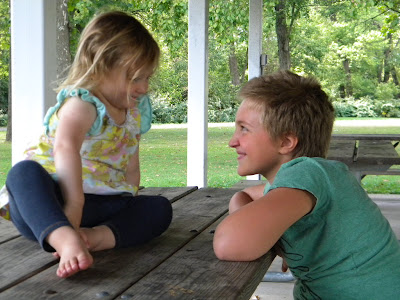 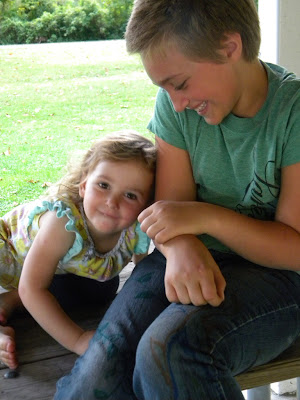 Miss H is a trip.  She is her Mama in a nutshell: confident, calm, knowing, assertive, comfortable, and so friendly.  We left Seattle before any of our friends had kids, and it is really something to see part of your friend walking around in a little person.  She is easy-going and game and so lovely.  Just like her Mama. 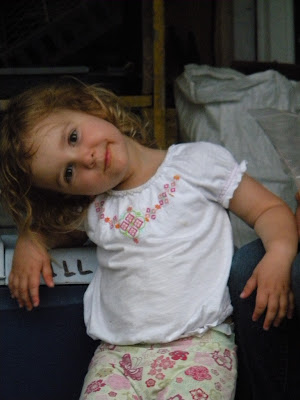 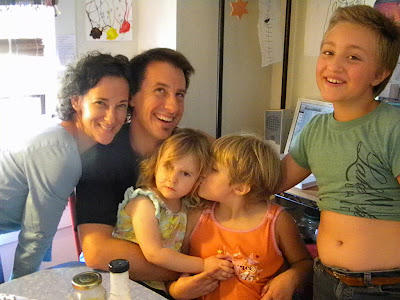 Dan and Eliza left yesterday afternoon for the annual Silver Baby Golf Tournament (I wrote about it here and here if you don't believe me), which is taking place in Maine this year. Yes, really, and yes, it is both crazy and totally worth it.  Why homeschool if you can't flaunt the start of school by road-tripping to Maine to camp and party for a few days? While Ani and I had little daydreams last night about joining them, we are so happy to be here for a couple of extra days with our friends.  I won't say that having a toddler here hasn't been challenging for Ani, who articulated her position today on a walk, saying, "I am not really a big kid, but I'm not a little kid anymore either. I just don't know what I am anymore!"  There has been some pushing of limits (oh, the power) and some baby talk but really, she has done an amazing job of having her space and her stuff explored from sun-up to sun-down by this little girl. I think it's because she really loves her so much that she hasn't retaliated other than to rescue a few "favorite toys" and shed a few tears of frustration. 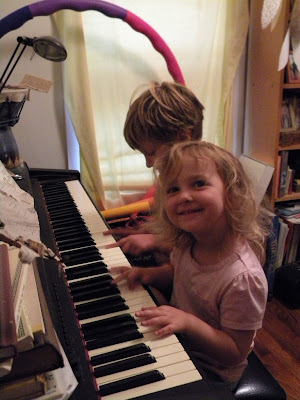 During a particularly peaceful moment yesterday with toy boats and animals and little girls we heard Ani say to Helvi, Isn't this such a sweet time we're having? Yes, it is.  Blocks and babies and bubbles and chalk and music-making and painting and nightly bath-time...it is all so very very sweet. 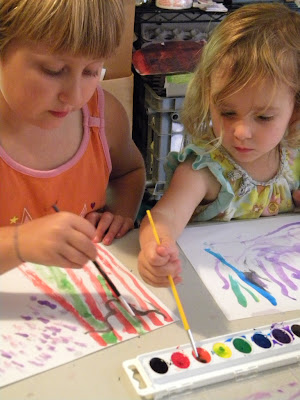 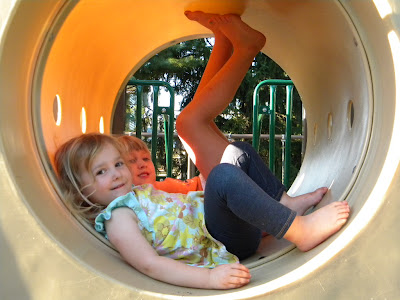 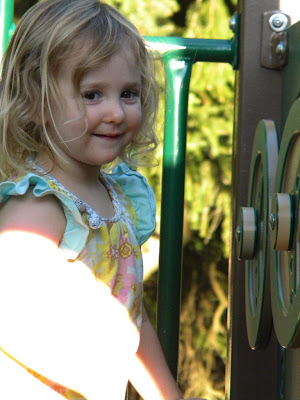 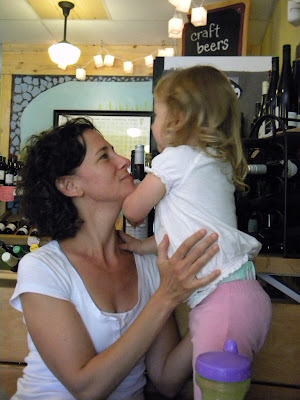 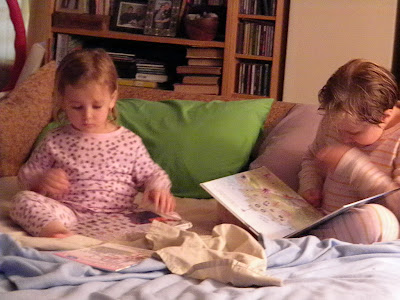 I just can't quite be done. Our trip was so lovely, and we saw so many loved ones, so here is a last glut of photos that will be most meaningful for family and friends...hang in there! Normal life is about to resume (don't tell me otherwise. I'm not ready.)! 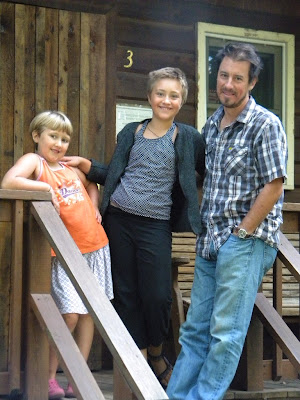 The last day of our trip was also Dan's birthday, so we made a special detour to visit a cave in southern Indiana.  Dan has a soft spot for caves, having been a guide for several years at the Cave of the Mounds in Wisconsin.  We arrived late the night before, so rather than shlepping a tent along for one night of late-night camping, we sprang for a cheap primitive cabin right at the site of Marengo Cave. It was just the ticket - a dark place to crash after driving the length of Indiana (after years of driving across Indiana and wishing - sorry but it's true - wishing it just wasn't there, we groaned that we had managed on this trip to make Indiana just that much longer to cross...).  Up at dawn, breakfast in a greasy spoon, and we were ready for the cave.


We were all in ridiculously good moods, happy to not be jumping right back in the car, giddy with the on-the-road feeling of doing what we never do on car trips, which is sight-see.  We're usually in the car for 12 hours at a time, Just. Trying. To. Get. There. 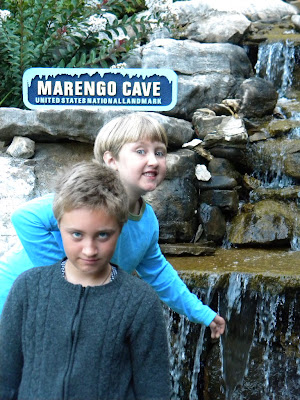 These photos are so cheesy, they crack me up.  The one above is destined for Awkward Family Photos.  Eliza's setting fires with her gaze and who knows what mischief Ani is up to... 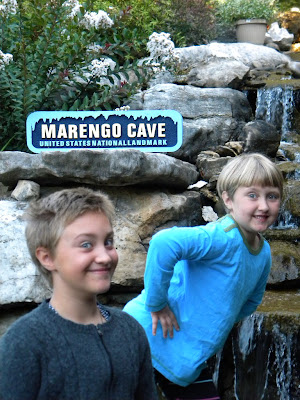 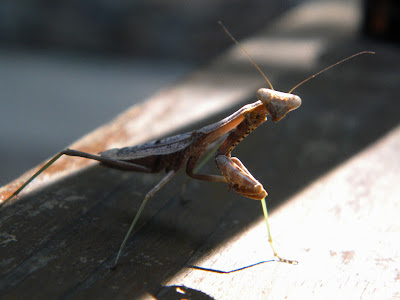 We opted for the hour-long tour, instead of the 7-hour spelunking experience. 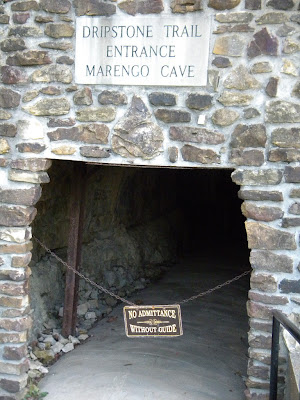 Ok, here comes the glut of reddish photos that are me insisting on taking photos in the dark.  It was soooo cool though, and I hoped to catch a bit of that.  I was glad Dan was along, knowing what to look for, outside of the rehearsed tour patter. 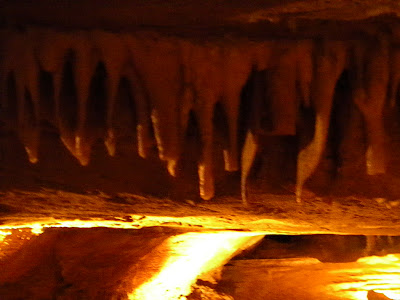 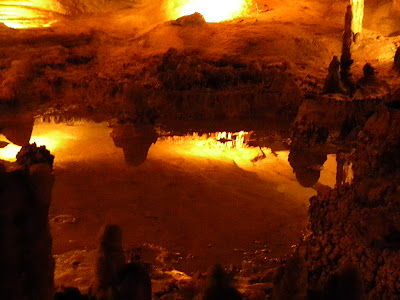 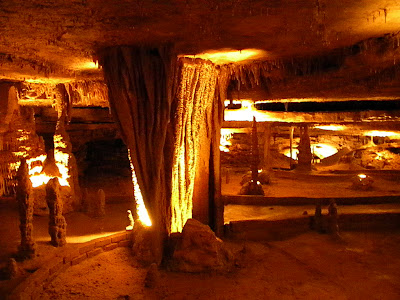 The girls' favorite part was 200 feet below the surface, where sandstone was overlaying the limestone, creating an umbrella effect, which meant less water and therefore fewer formations below.  To make this large cavern interesting, the guide encouraged us to throw pennies at the ceiling, where they would hopefully attach to a blob of mud and stick.  Apparently they've been able to raise thousands of dollars this way....hmmmm. Creative.  I didn't manage to get anything to stick. 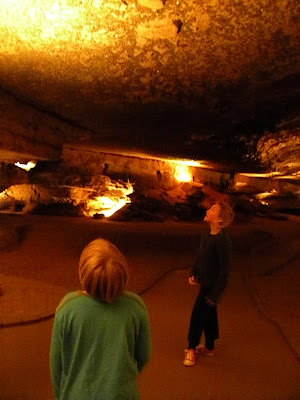 This cave has an interesting history of being used by the community for various events:  weddings, church services, a production of the play "Oliver" by a class of 7th graders, and, my favorite, an annual square dance!  This frivolity and free use ended at the end of the seventies when people got wise to the damage a party of 300 can do to the ecology of a cave. 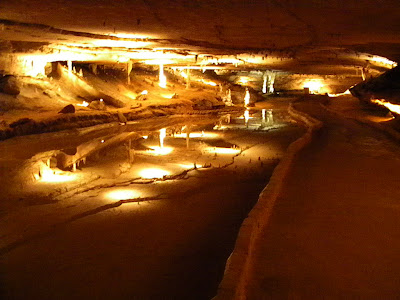 We had hoped to visit the nearby Wyandotte caves, but they've been closed for a couple of years, due to the spread of the white nose fungus in the bat population.  Our guide at Marengo said that as they are not a bat cave, only housing a handful of bats, they felt they weren't putting the local population at risk of the fungus.

We returned to the light, filled our water bottles up and hit the road...for home.
Posted by slim pickins at 10:13 PM 1 comment:

Labels: celebration, family, traveling
Newer Posts Older Posts Home
Subscribe to: Posts (Atom)
Welcome! We are a life-learning family in South Eastern Ohio and this is a journal of our day-to-day living...We would love to hear from anyone wandering this way in the blogosphere, so please say hello in the comments!