After I had my babies, something happened to my smell.  I mean, chemically, I really think something happened that changed the way I filled the air around me with scent.   However, I didn't ever think it had gotten so bad that the people around me would notice.  I remember commenting to Dan once, in exasperation, "Oh MAN, I smell like I just rode a bear across the country!"  He didn't skip a beat. "Honey, you smell like the bear."  I guess he had noticed.  Now, my babies, on the other hand, have always nestled in my armpits. It is the smellscape of their earliest memories. Let's imagine that for a moment....Shoo! It's almost too much to contemplate.


Asking Eliza about my smell, she says, "To tell you the truth, it's kind of comforting.  I mean, you've always smelled that way and it's just YOU. I think it's just fine."  Clearly, she is biased, bless her.

I've had friends (good friends. you know who you are and I love you for this.) share with me their own secret formulas for getting rid of body odor as if I might benefit from the same knowledge, and it's all worked, for a short time.  I even doubled up on the deodorant for a few years, using the crystal and Tom's or something similar.

It didn't work. None of it.  Summer means new t-shirts every few hours, deodorant in my backpack for a pick-me-up, and - the worst of it - hearing myself apologize constantly for the way I smell. Aside from the fact that I've been told I apologize too much on a non-sweaty day and am trying to break myself of that habit, I actually have a fondness for my smell because it reminds me of my Grampa Spangler and the way he would smell - sweat, sunshine, wood shavings - when he'd have been out in the yard or in his workshop.  But smelling like your Grampa is not exactly in, so I have grown self-conscious, I guess.

Until this summer.  It is practically a ritual with one of my friends from Seattle that when we see each other we pull out our notebooks and start sharing the list: books, movies, food, health, exercise, spirituality - it is all there in our notes, the things we have discovered or have discovered us that we absolutely have to share.  Sacagawea, Bees Knees (gin, lemon, honey), Challah Bread, Anne Lammott, bucket showers, kimchi - really, it's all there. So she mentions, as one of her many many shares, that she is making her own deodorant now.  I barely even blinked - I mean, really. This may work for the non-sweaty beautiful people out there, but not us hairy bear mothers.  So I ignored her and quickly moved on to the oil facial cleanse treatment (divine).  Fast forward a week, and it is our last night with them before we head south to Mt. Rainier and the Oregon Coast where we will be camping for four days.  On a whim, I say, that deodorant? Wanna show me? And with much skepticism, I smeared it on. 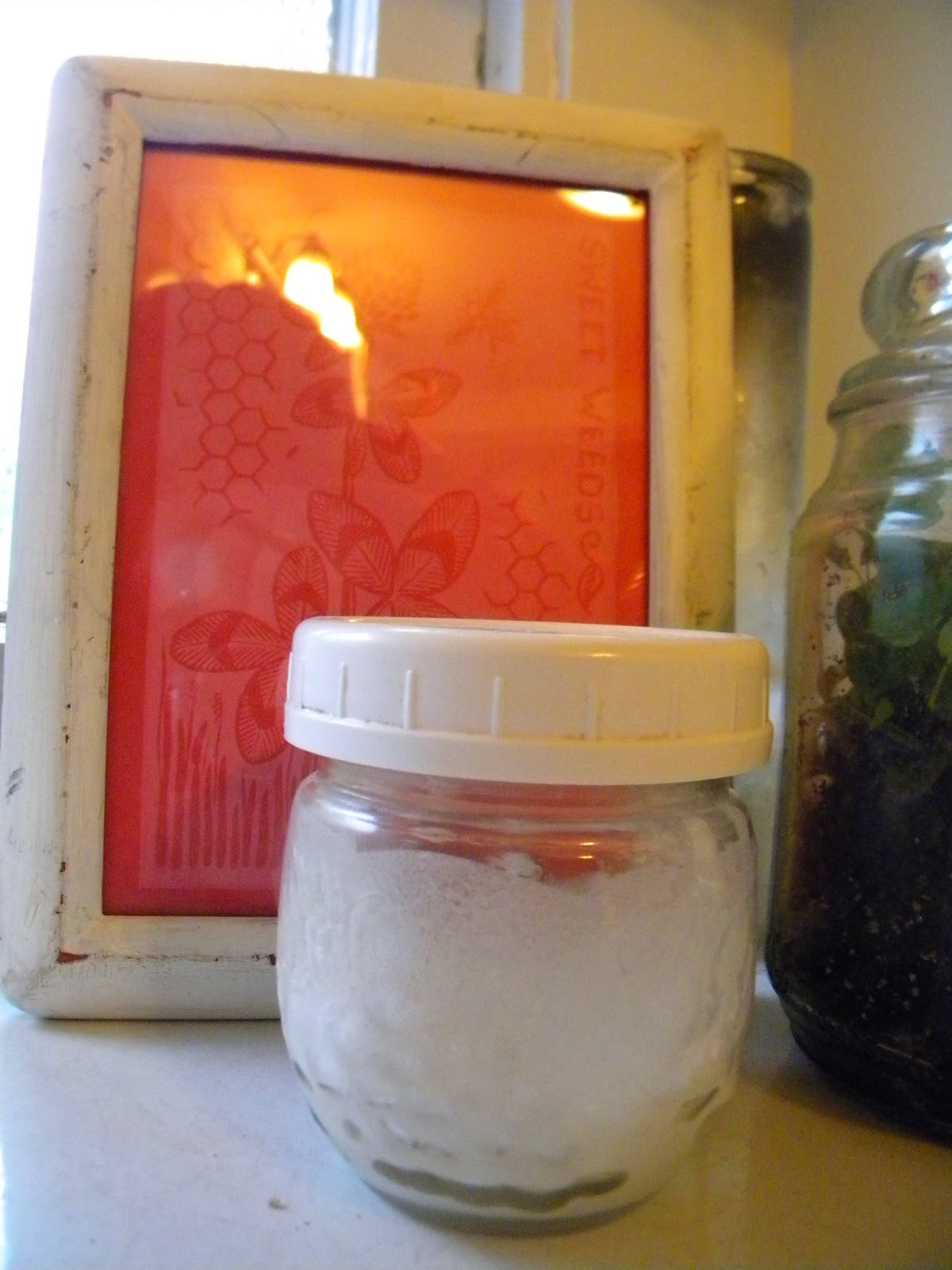 If I could employ some dramatic music here or lean over and squeeze your hand, I would, because - people. PEOPLE!!! People, you have to believe me that I did not smell. At all.  For four days.  Let me get even more graphic here:  I did not shower or touch my pits for FOUR DAYS OF HIKING, CAR RIDING and CAMPING, and I. Did. Not. Smell. At. All.  My poor family - I kept shoving their noses in my zazoos (that's what we called them in my family - yours?) and asking them to testify, because I could not trust my own senses to be true in this foundation-shaking moment. Nothing. Shaking of the heads, in disbelief: nothing.

Stunned and jubilant was how I felt when we hit town for my cousin's wedding. I could barely contain my enthusiasm for this new-found knowledge.  Really, it was treasure, for so many reasons. First, it was summer - hot, sweaty, smelly summer. Second, I really have spent a lot of my time managing my smell and my sweat - thinking about it, worrying about it, apologizing for it, trying to get over it. Third, when I tell you what is in this deodorant you are going to start whistling like we weren't even having a conversation and try to change the subject because either you just flat out aren't going to believe me, or you're going to think I've lost my hippie mind and no way in hell would you even consider trying this, or  - you are going to close your eyes in relief and gratitude that the answer to your prayers was so simple and straightforward and without a doubt the best life hack you've had handed to you in a long, long time.

So, during the night-before-the-rehearsal-dinner, when the groom's family meets the bride's family and everyone basks in their almost-newlywed glow (there was so much beautiful glow for this couple) I snuck a moment with the mother of the bride and hit her up for the ingredients.  She raised her eyebrows but was willing to, you know, tear herself away from her daughter's wedding festivities to help a girl out.  I'm afraid my over-stepping the boundaries of sharing too much information was only beginning there. I mean, I understood somewhere in my social animal make-up that the wedding was really not my platform for spreading the good news, but who can help herself when there are women all around her all day long brunching, making wedding decorations, lifting tables and chairs - and profusely sweating and complaining about their own sweat and odor production!! I did give myself some rules. Well, one rule: they had to mention their sweatiness on their own, I could not point it out or bring it up myself.  Once they said the magic words, they were mine.  My cousin, of course, was one of these women, and I'm afraid she caught me more than once talking about body odor at her rehearsal dinner but I swore then that I'd followed my rule and I'll swear to you now that I did not mention it even once to anyone not related to me during the wedding reception itself. Not once.

So here is the big reveal: coconut oil and baking soda.

Are you waiting for more? That is it. Coconut oil and baking soda.  And for the less smelly and more hardcore or frugal, just the coconut oil can work.  I start with a tablespoon of each and tweak it, working toward a paste that will rub in nicely, like a lotion, and not feel caustic or gritty.  I apply a pea-size amount after a shower, careful to rub it all in so my clothes don't get stained from the oil, and I do not need to reapply until the next time I shower, and after telling you so much about me, I don't mind saying that that can mean a day or two or three or four...Me. The smelly one. Four days, easily. Astounding.

I probably don't need to mention that part of what makes me so stinkin' happy is that I don't have to buy deodorant anymore, but just stroll to the kitchen to make a new batch, and a couple of tablespoons can last for months.  No more products, no more plastic with a rolly-thingy that I can't figure out how to recycle, none of it. This makes me intensely happy. If I thought that people would be accepting of this as an actual gift, I would make it for everyone I love for Solstice, put it in a cute little jar, and they would know, really know, how much I love them.

Now as for the sweating, well, it is a sign that my body's cooling system is working really well.  I am trying to just embrace it as my super-power.  It hasn't stopped my friends from hugging me yet, but it's a little ridiculous.  Maybe my next hack will be for some kind of fashion statement that looks like a casual cape but is really a terrycloth towel that people can surreptitiously wipe as they release me from a hug so I don't have to see them wiping their hands down on their thighs. Or I could just laugh and shrug apologetically while reminding them that it could be worse; I could pee myself like the mighty vulture does when it gets overheated...

I've challenged myself to write a post a day during the month of November. So far so good!
Posted by slim pickins at 10:37 PM

Oh My Gosh!! I'm laughing so hard,here!! I can hear your voice as I read this, interspersed with your infectious giggles!!! As I said in an earlier post, you are SUCH a good writer!! And, you don't stink!!

An excellent, very funny post! Thanks for sharing, I'm laughing too...the cape idea is great! I'm going to try this, store bought deodorant is so strange especially when you can't wash it off.
~Nancy

Thanks to this, at Silver BAby I only smelled of smoke and dirty hair! I was wearing a lot of layers, sweating in them for days too!!
No BO !!!
I was thinking of you and thanking you for this miracle!

So.
I've been using my deodorant for the last six months.
Had to come today, to get the recipe... it's been so long that I did not remember the portions are 1:1 (I've only made it once, after all).
No doubt the deodorant I'll use for the rest of my life. <3
My last batch was geranium... I've been contemplating this one for a few days. :)
Maybe rosewood eo? Thanks so, so much. xx00