It's almost assessment time here in Ohio: the public school across the street has their last day tomorrow, and we're being catapulted into summer with 88 degree temperatures. I don't stop keeping track of what we're doing over the summer, but I don't shape our time quite like I do the rest of the year, mostly because we stay so darn busy! I always think life will slow down with the ending of dance classes and choir, but something else always comes to take its place. This year it's Midsummer Night's Dream, in which Eliza is Cobweb, the fairy - and which Dan is directing in his second year as Tantrum Theater's Artistic Director.

This was also a paltry blogging year for me. I'm still figuring out why. Some of it is that we are spending more time independent from one another, and more of that time looks like reading and writing on the computer - none of which quite captures the camera like a nature walk or making mudpies (those were the days...)! But we're still here, and this is a nice way to keep track of life whirling by, so I'm launching a major catch up in the next couple of weeks, mostly for me, but maybe there is someone out there still checking in once in a while (yes - Hi, Mom!). There will be many many photos, and then some narrative and lists, not exhaustive, just keeping track of some of the ways we spent our time, including links to resources. I'll use these posts as part of our annual assessment - so they may not hold your interest all the way through! Just look at the photos and carry on! 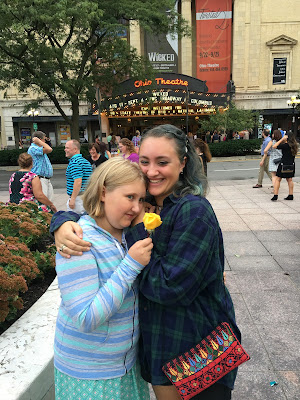 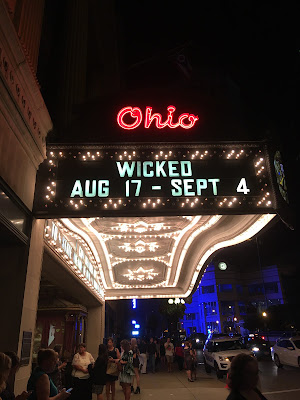 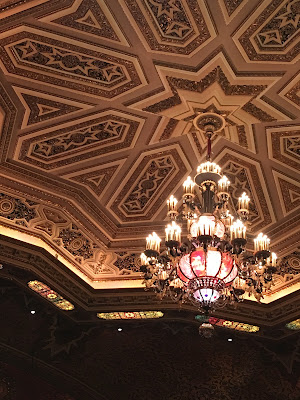 (We finally got to see a touring production of Wicked, in the old Ohio Theater in Columbus, and it was so overwhelmingly fancy that Eliza started to cry when we sat down. This is in spite of the fact that none of us were sitting together, and Ani had just come down with a fever...) 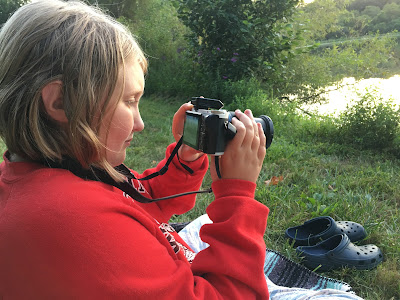 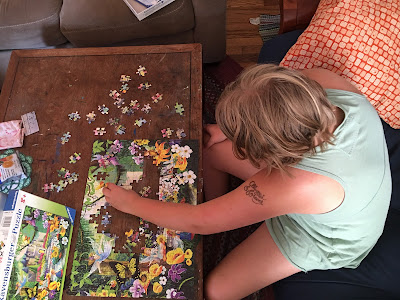 (The fever turned into a week of feeling poorly; lots of listening to stories and putting together puzzles, while Dan and Eliza traveled to Tennessee for the annual Silver Baby Golf Tournament.) 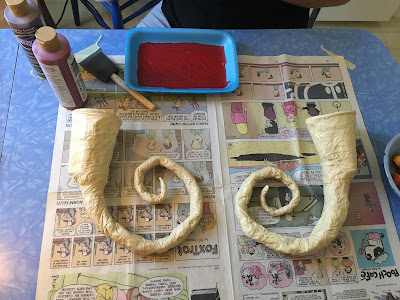 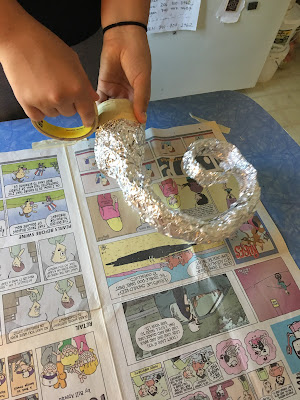 In September we took on the care of a friend's almost four-month old, and it quickly became clear that Ani would be a primary caregiver during our time.  Eight months later, that still bears out, and she has competently bottle-fed, changed diapers, swaddled, and worn that baby! Now of course it's more about putting the baby down so she can run, so the skill set is changing, but Ani remains attentive, doting, and fascinated by infant and child development. 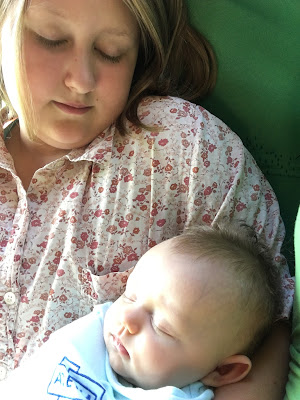 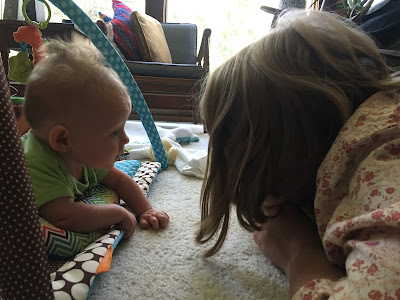 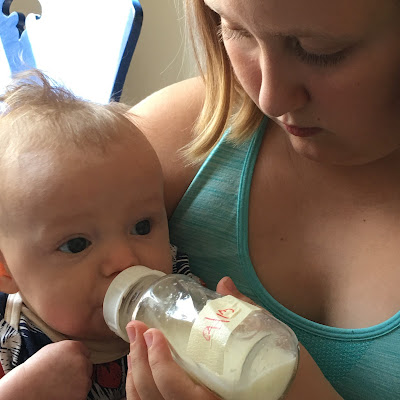 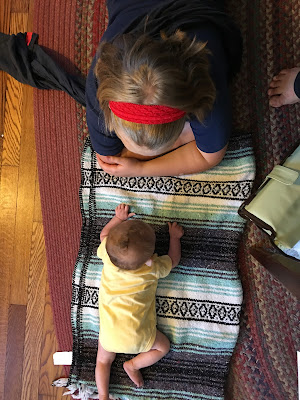 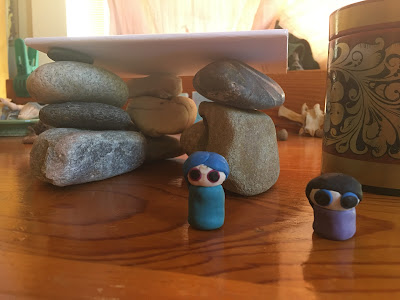 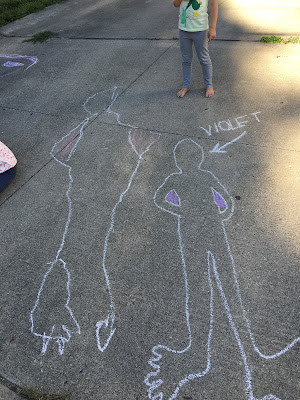 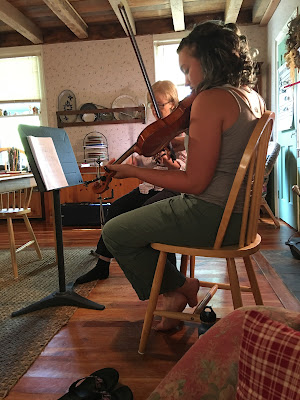 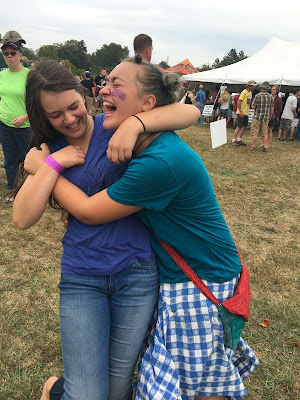 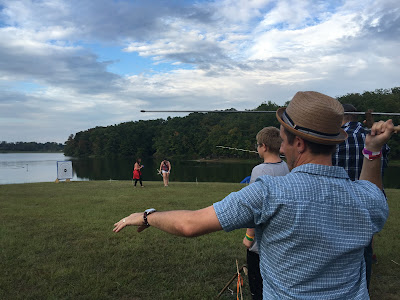 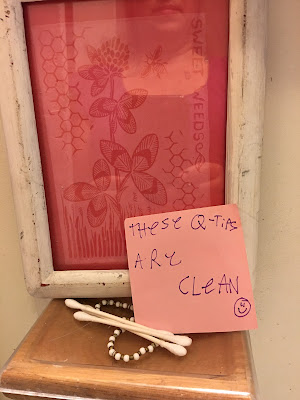 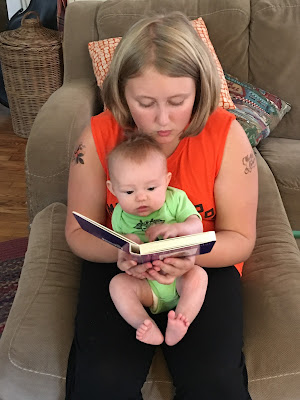 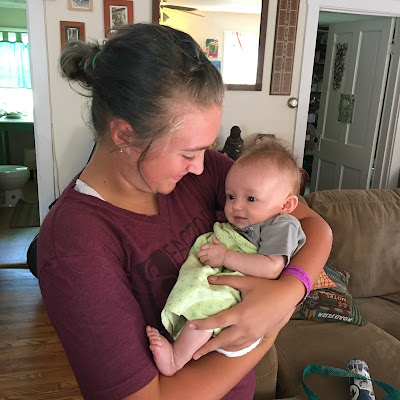 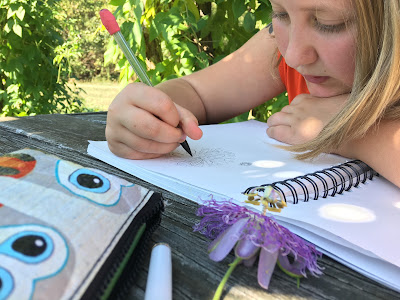 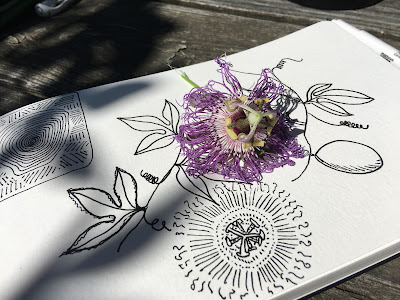 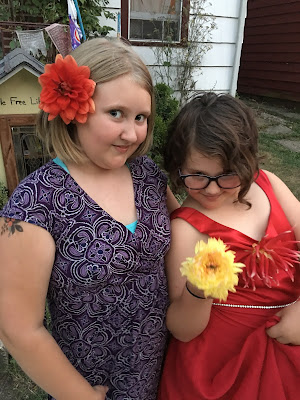 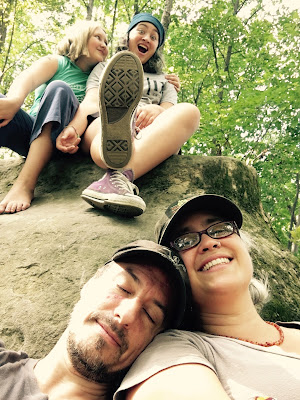 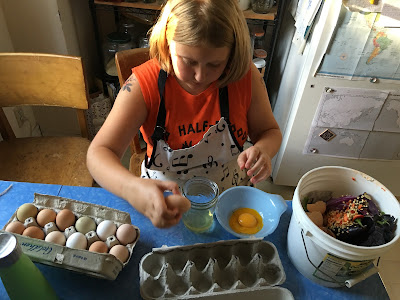 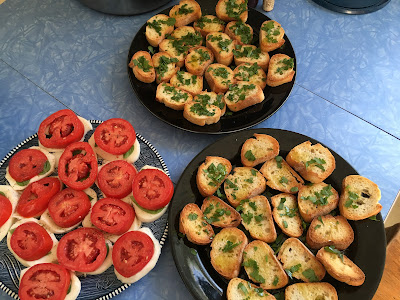 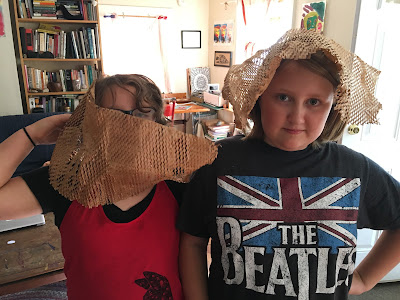 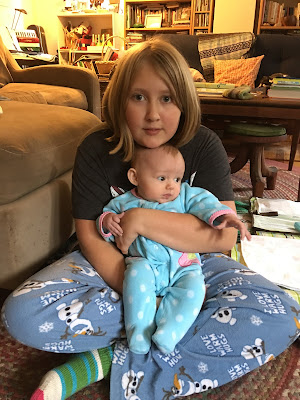 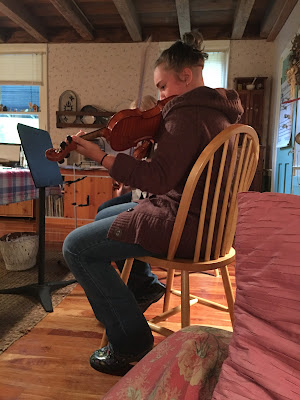 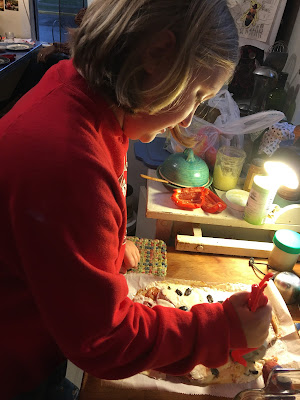 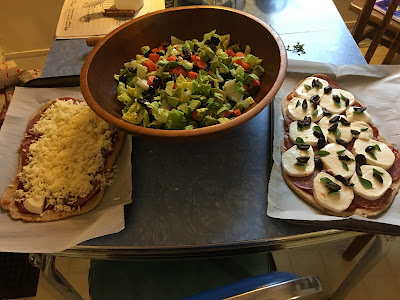 September was the start or resumption of many things: the picking up of a friendship that had been long-distance for a year; fiddle, dance classes, Silver Baby Golf Tournament.  We eased into math with a book called Math and Magic in Wonderland, reading it aloud. Ani declared "I want to do science that is interesting, interactive and delicious". Well, we managed the first couple of criteria when I found Mystery Science, which creates inquiry-based units for educators. Unfortunately, most of them are for younger children, but we did a couple of the units geared towards the oldest, starting with The Birth of Rocks, focusing on volcanoes, and supplemented with Crash Course and other videos about Earth Science.  We also started most days with CNN student news - which often lead to long conversations and research - and participated weekly in the New York Times "What's Going On In This Picture?" conversation.

A highlight from the month for Ani was the decision to study other countries through their food, starting with Italy. She also ended with Italy.  Turns out she just wanted to make a lot of pasta and pizza, biscotti and caprese salad! No one complained...She also read Italian folk stories, and daily mapped out a trip my dad was taking around the Mediterranean, looking up information on some of the locations. We looked at a virtual tour of Rome, she read Roman Diary: The Journal of Iliona, Starry Messenger, about Galileo, Leonardo's Horse, about Leonardo Da Vinci, and worked on learning the countries of Europe.

Read about Amelia Earhart (This Broad Ocean and Adventure in the Sky)
Read The Half-Blood Prince and The Deathly Hallows
Read The Lost Colony of Roanoke
Worked on writing and cursive
Conversation about time zones, looking at maps

Eliza started her fall in Italy too; she learned about history through Dr. Who during the fall, starting with the episode on Pompeii.  She and Dan took advantage of the fabulous National Theater Live showings at our local cinema: One Man Two Guvnors, View from the Bridge, The Audience, and Three Penny Opera.  She also attended a University production of The Library.  We attended a showing of Another Kind of Girl Collective, short films by and about young Syrian refugees, with a talk-back by the filmmaker and teacher who lead the project.

Are these really your pictures from September lol? How could you remember what y'all did!!!? Keep blogging! Even if just for your mom and a few others. I had the best time going through my blog with the kids from about 6 years ago. It's not public anymore but it is still there for us. I love it and I am so glad I kept it. I would love to have something like it from my childhood.

Ha! Yes, these are really from September, and I do better keeping notes of what we actually do than I do planning out what we *might* do; then I try and fit it all into some semblance of school for our annual evaluation! Don't know what I'd do if I lost my notebook, so it wigs me out when I get sooo far behind on the blog! And yes, I miss checking in on your family and am glad to "hear" from you!