We've been into a rhythm for about a month now - a skeleton of a schedule which we are filling with American prehistory and Van Gogh and astronomy and french and fractions - but I've been away for a couple of weekends, we've had a beloved visitor, and every activity we are involved with is up and running full steam. Dance classes, film class, choir, and activism, it is all fulfilling and overwhelming, at the same time.

Monday morning dawned and I thought: shoot, we've got to Slow Down.  Our learning time works best with some spaciousness, a relaxed pace and some time to compost. We have really been missing that. So I met the girls on the couch after morning chores and we picked out a book to read aloud.

Yes, at twelve and fifteen my girls can read to themselves, and do so insatiably, but they still love to be read to. A year and a half ago we read my childhood copy of Ellen Raskin's The Westing Game, and it was a blast! So funny and smart. They wanted to read it again, but I told them there was another Ellen Raskin, so now we are several chapters into The Tattooed Potato and Other Clues.

Last year our morning was anchored by time we spent at the kitchen table after the dishes were cleared away. We would watch CNN Student News to follow current events, which often lead us down one path or another.  We would follow that with the New York Times What's Going On In This Picture? , a great jumping-off point for conversation, together and online.  Sometimes it was to Khan Academy to watch an art history video, or it was to look at a map or more photos.  This year Ani requested that we not start every day with current events. It has felt really overwhelming and depressing (don't you think???)  and to be honest, she cringes every time she hears 45's name. She has always been clear on what she can handle, so for now we are staying away from the news and having simpler conversations when there is something to know.

I am not always as successful limiting my own media intake these days, and it can quickly throw me off balance. I'm going to follow Ani's lead on this one, and have one-on-one conversations with Eliza, who wants to be in the know.  It also feels good to start our days with a book in hand, not with a screen.

So we're gathering on the couch, with magnetic mosaics and drawing pads, pompom makers and paints, to listen to a story.  It is exactly the right thing for Now. It takes precious time out of our mornings, but it is the heart of our days and puts us in a place where we can move into the work we find more challenging.  Tattooed Potato is an odd enough book that we are making connections all over the place: impressionism, the old song Oranges and Lemons, Humphrey Bogart...we're learning all kinds of interesting things.

Our other anchor of the week is our time with this little bean.  She's signing, talking, climbing, asking, showing...so busy! 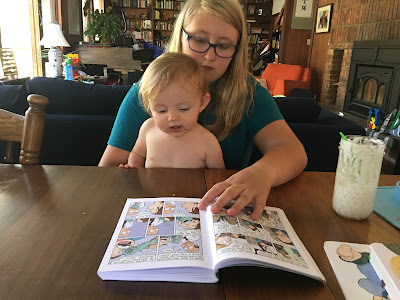 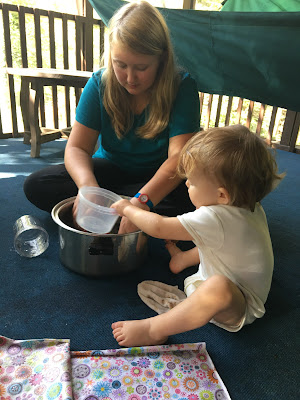 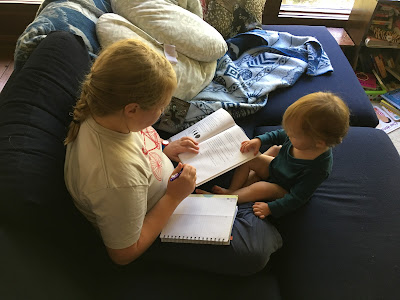 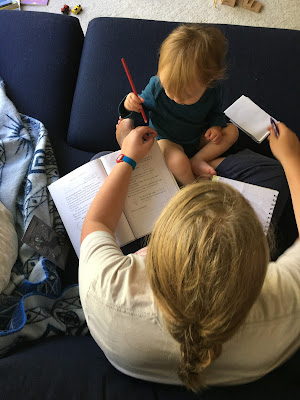 (I'm not sure if this is Ani's favorite way of doing math, but she's very patient with her curiosity!)

Labels: books, the daily do